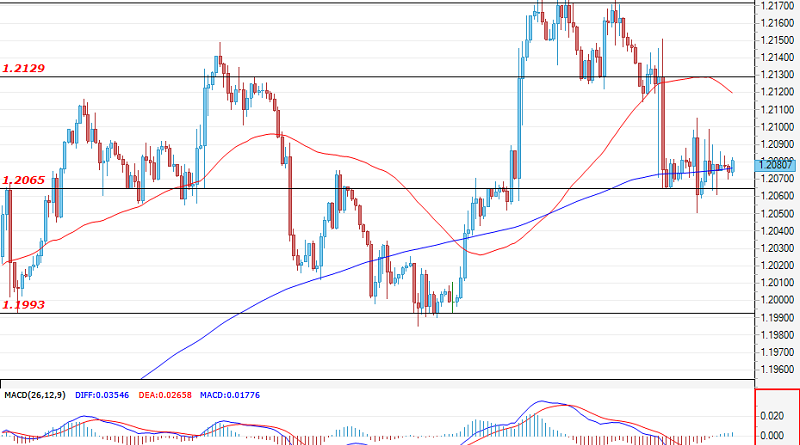 The resistance at around 1.2170 turned out to be a major obstacle for the bulls, and the sell-offs managed to breach through the local support at 1.2130. At the moment, the pullback move is limited by the support at around 1.2065. This area has already been breached several times in both directions and is not considered to be very reliable. Buyers, however, can count on solid support at around 1.9990. Market sentiment is mixed and it is likely that, in the coming days, the market will remain limited between the zones of 1.9990 and 1.2170. A swift bounce of prices towards 1.2170, however, would tip the scales in favor of the bulls. In the event this area is breached, the next goal of the rally would be the resistance at 1.2340. Today, an increase in market activity can be expected around the announcement of the U.S. retail sales data at 12:30 GMT.

The bulls are once again dominating the market, which seems to be preparing for a breach of the 109.68 resistance. The local support is 109.40, while the more significant one is found in the range between 108.65 and 108.94. The sentiment favors growth for the Greenback, but the market may need more time to secure a breach due to the fact that the 109.68 resistance comes from higher time frames. Moves below 109.40 are not excluded, but are expected to be considered as a buying opportunity.

The market has entered a retracement stage, which is expected to be more complex and include several lows. The resistance at 1.4146 was last reached in February this year and, since then, we have been witnessing a huge pullback phase. A breach here would open the possibility for a rally towards 1.4600. Moves below 1.4000 are not excluded but, at the moment, the upward trend is not threatened and the forecasts for new rallies remain positive. Viewed through the prism of the higher time frames, only a drop below 1.3700 would turn market sentiment sour.

Therefore, we will continue to suggest the bearish trend for the upcoming period, taking into consideration that breaching 1828.00 will stop the expected decline and lead the price to resume the main bullish trend again.