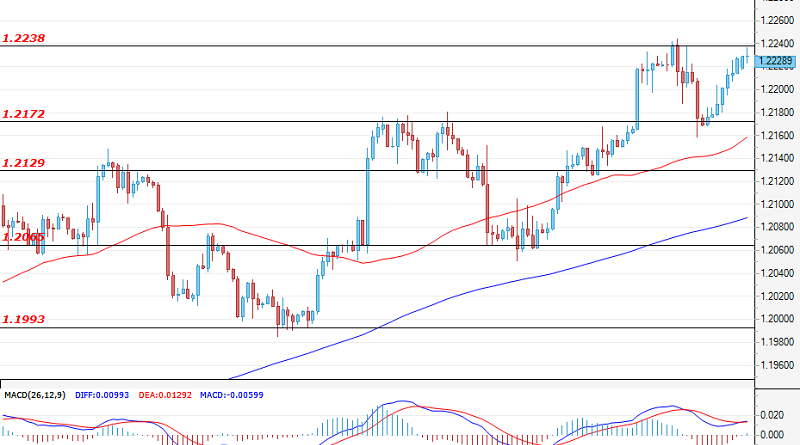 After the test of the support zone at 1.2172 from yesterday, the bulls prevailed and the EUR rose against the USD. At the time of writing, the upward movement continues and the pair is about to test the major resistance at 1.2238. A successful breach should easily lead to new gains for the EUR/USD and strengthen the positive expectations for the future path of the currency pair. If the bulls lose momentum and fail to breach 1.2238, the pair will most likely remain in the range between 1.2172 and the mentioned resistance. However, if the bears manage to successfully violate 1.2172, the sell-off should deepen towards 1.2129 where the buyers will most likely step in.

The U.S. dollar lost some ground against the yen and the currency pair managed to test the lower border of the zone between 108.83 and 109.26. A successful confirmation of a breach here could easily pave the way towards the next target at 108.44 and lead to a continuation of the sell-off that started last week. If buyers take the reins , the pair will most likely test the resistance level at 109.26, but only a violation of 109.67 could strengthen the positive sentiment.

After the sell-off was limited to just above 1.4080, the Sterling regained some of its lost positions. The Cable breached the resistance zone at 1.4144, but at the time of writing, it seems to have lost some of its upward momentum. If the bulls continue the attack and successfully violate the next resistance zone at 1.4208, the currency will most likely target the highs from February. If the bears prevail, a test of the level at 1.4144, which is currently acting as a support, can be expected. However, only a successful breach of the next target at 1.4080 could deepen the potential corrective move towards 1.4035. Today, the more important news that could impact the Cable is the Preliminary PMI Services for the UK at 08:30 GMT.

Gold price continues to fluctuate inside the intraday bullish channel that appears on the chart, and the EMA50 continues to support the price, thus, the bullish trend scenario will remain valid and active for the upcoming period, which targets testing 1900.00 as a next station.

Note that holding above 1858.00 is important to continue the expected rise, as breaking it will press on the price to achieve temporary bearish correction and head towards visiting 1838.00 areas initially before any new attempt to rise.