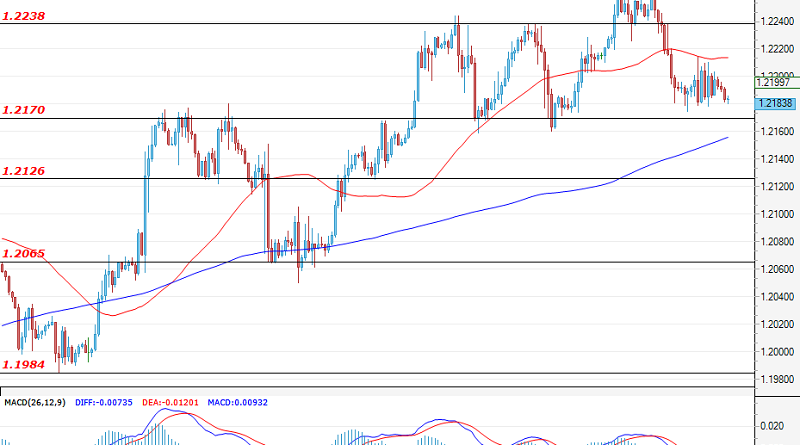 At the time of writing, the currency pair is still in a consolidation phase, remaining slightly above the support level at 1.2170. The mentioned zone is also the lower border of the formed range between 1.2170 – 1.2240. The expectations for today’s trading session are for the EUR/USD to remain in the mentioned range as, for now, neither the bulls nor the bears have managed to tip the scales. The most likely scenario for the pair is for the aforementioned support to repel the bears and for a follow-up test of the resistance zone at around 1.2240. During the last trading session for the week, there is no economic news and statements that would be expected to have a serious impact on the market.

The bears failed to deepen the sell-off of the U.S. dollar against the Japanese yen and the resistances at 109.21 and at 109.67 were easily overcome. The latter was made possible mainly due to the better-than-expected initial jobless claims data for the U.S. The bulls were limited under the resistance of the higher time frames at 109.93, and the most likely scenario is for a consolidation below the mentioned resistance zone, likely followed by a correction in the negative direction.

The Cable continues its range move in the narrow channel between 1.4101 – 1.4208. The most probable scenario for the moment is for a depreciation of the pound against the U.S. dollar and a test of the lower border of the channel at 1.4101. On the other hand, in the event of a breach and a strengthening of the bullish sentiment above the resistance at 1.4208, it is possible that we will witness an attack of the next significant resistance from the higher time frames – the level of 1.4300.

Gold price fluctuates at the intraday bullish channel’s support line now, which represents the first protection factor to the continuation of the recently suggested positive scenario, waiting to get positive motive that assist to push the price to resume the rise in the upcoming sessions, which targets 1928.60 level as a next main station.

Until now, the bullish trend scenario still valid and active as long as 1880.00 level remains intact, supported by the EMA50, noting that breaching 1900.00 will ease the mission of achieving the waited positive targets.