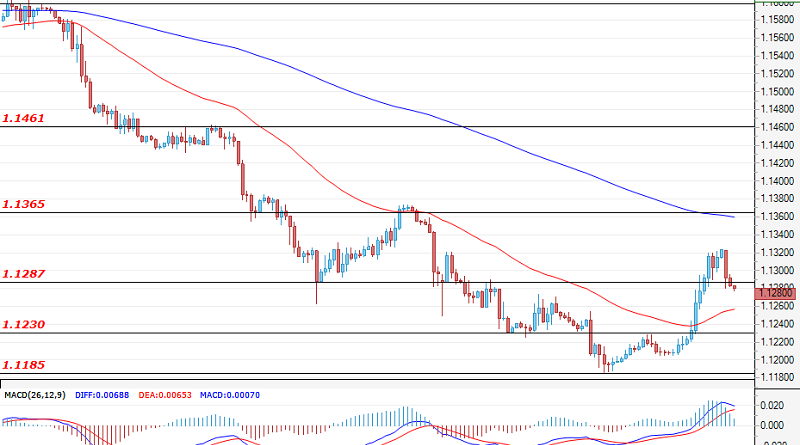 The currency pair entered a corrective phase after it had previously reached a local bottom at 1.1185. At the time of writing the analysis, the EUR/USD is confirming the breach of the resistance level of 1.1287 which, if successful, would deepen the correction and pave the way towards 1.1365. Alternatively, if the breach of 1.1287 is not confirmed, the correction would be completed and the downtrend would be restored, with its first target being 1.1230. This week, investors will focus on the CPI data for the euro area (Tuesday; 10:00 GMT) and the U.S. non-farm payrolls (Friday; 13:30 GMT).

The corrective phase was limited above 113.00 and, following that, the currency pair regained some of its losses and headed towards a test of the resistance level of 113.75. In case the pair manages to breach 113.75, it would enter the range in which the Ninja was trading a few days ago (between 113.75 and 114.89) and would probably consolidate within this zone. In the negative direction, the first support is found at 112.75.

The decline of the Cable was limited above the support level of 1.3300 and, at the time of writing, the currency pair is consolidating around the 1.3350 zone. In case a downtrend correction develops, it is expected to be limited below 1.3500. The negative sentiment is still intact and it is quite possible to witness another test of the support level of 1.3300. This week, increased activity can be expected around the release of the manufacturing PMI for the U.K. (Wednesday; 09:30 GMT) and the services PMI data for the U.K. (Friday; 09:30 GMT).

The EMA50 forms strong negative pressure that supports the continuation of the expected decline, noting that breaking the targeted level will extend the bearish wave to reach 1735.00 as a next station, while breaching 1797.00 represents the key to start new recovery attempts that target testing 1825.15. areas initially.