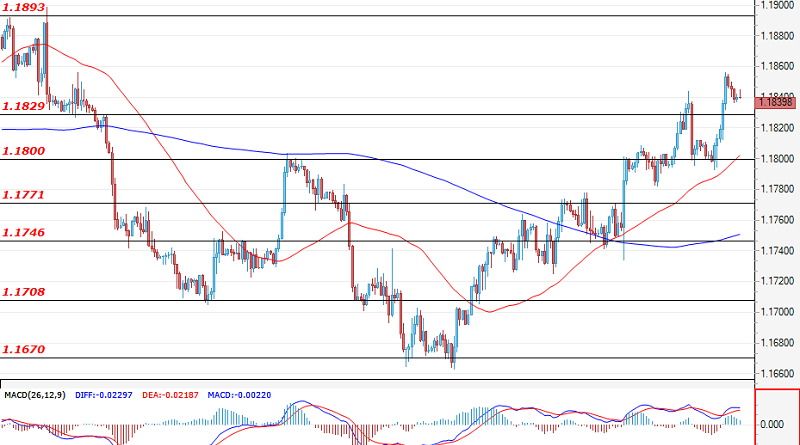 Following an unsuccessful test at the resistance level of 1.1829 and a short consolidation around 1.1800, the currency pair made another attempt to breach the mentioned resistance and the second test was successful. The forecast is for the bulls to build up the momentum and approach the next resistance level of 1.1893. In the negative direction, the first support lies at 1.1800. Today, increased activity can be expected around the announcement of the data on the initial jobless claims for the United States at 12:30 GMT.

The fleeting breach of the resistance and an upper border of the range, in which the currency pair has been trading for about a week now, at 110.18, wasn’t confirmed and the price quickly bounced back into the range between 109.48 and 110.18. Neither the bears, nor the bulls manage to prevail and breach either of the borders of the range, which would set a direction for the future movement of the Ninja.

At the time of writing the analysis, the Cable is testing the support level of 1.3765. In case the bears don’t manage to violate this level, this would signal an upward movement and a test at the resistance at 1.3800, possibly followed by a test at 1.3880. However, if the support at 1.3765 is violated, then the minor support at 1.3732 would be the next target for the bears, before they approach the main support at 1.3600.

Gold price didn’t show any strong move yesterday, to continue fluctuating around 1815.00 level, thus, the bullish trend scenario will remain valid as it is without any change, which depends on the price stability above 1797.00, organized inside the bullish channel that appears on the chart, noting that the waited targets begin at 1825.15 and extend to 1860.00 after breaching the previous level.