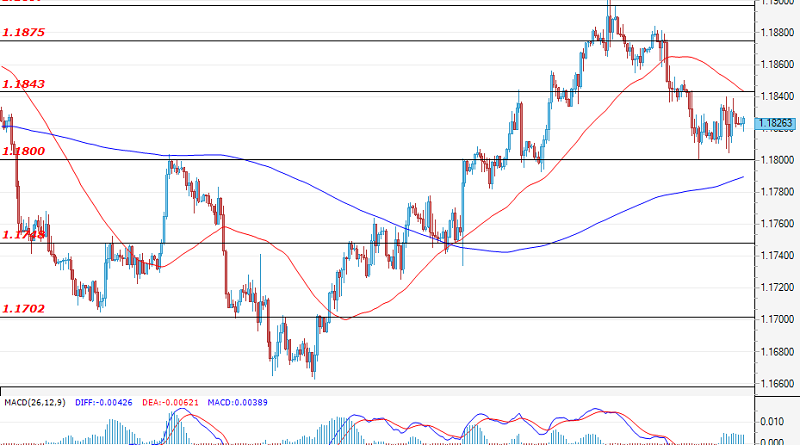 The consolidation of the currency pair remains between 1.1800 – 1.1843 as part of a corrective move that has been ongoing since the end of last week. The sentiment is still positive, with the main resistance for the bulls being the zone at 1.1843. On the other hand, if the bears manage to maintain their positions and succeed in establishing themselves on the market, we may expect a further decline and a breach of the zone at 1.1800, which would strengthen the expectations for a prolonged sell-off

The situation for the U.S. dollar against the Japanese yen remains unchanged as the range between 109.60 – 110.40 is still intact. At the moment, neither the bulls nor the bears have managed to prevail, but the bulls’ second failed attempt to breach the resistance at the upper boundary of the channel apparently encouraged the bears and they took the move towards the support zone at 109.60. At the time of writing, the currency pair is consolidating just above the mentioned support, but with a successful breach of this level, the bears could prevail and pave the way for an attack on the next support zone of 109.23.

The corrective phase for the currency pair ended as the bulls managed to limit the sell-off at the 1.3730 support level. After the British pound rose against the U.S. dollar during yesterday’s trading session, the pair is now preparing to test the resistance at 1.3851. A successful breach of the mentioned level would confirm the positive sentiment, which is aiming to reach the local high at 1.3890, and we may witness the formation of a range before that. Today, investors will focus their attention on the GDP data for the UK (06:00 GMT).

Gold price hovers around 1797.00 level since yesterday, starting today with bullish bias in attempt to breach the mentioned level, which hints heading to recover in the upcoming sessions, to target 1825.15 areas mainly.

Therefore, the bullish bias will be suggested for today, and breaching 1803.00 will ease the mission of achieving the mentioned target, noting that failing to hold above 1797.00 will put the price under the negative pressure again, to head towards testing 1770.00 initially.