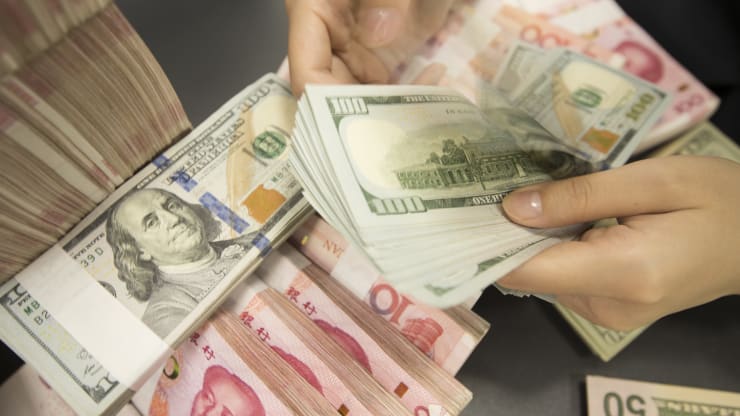 The dollar pushed higher on Wednesday and flirted with the $1.10 level against the euro, boosted by yet more talk of a deal to resolve the U.S.-China trade dispute.
The greenback, which this week has risen in line with the more positive tone in trade negotiations, also increased versus the yen towards three-week highs.

Wednesday sees little new data releases in the euro zone but a clutch of revisions in the United States ahead of Thursday’s Thanksgiving holiday.
“Everything all told, the U.S. data is more likely to support the dollar, so that EUR-USD might well drop below the $1.10 mark again today,” Commerzbank analysts said in a note.
Euro/dollar volatility remains at low levels and largely stuck in tight trading ranges in the absence of major catalysts such as monetary policy shifts.
Investors are growing more hopeful of a trade deal between Washington and Beijing – U.S. President Donald Trump said overnight that Washington was in the “final throes” of work on a deal to defuse the trade war.
Many analysts say investors have struggled to make up their minds on whether trade optimism and a buoyant risk-on mood is a positive for the safe-haven dollar, especially as the Federal Reserve has been cutting interest rates.

“We’ve been risk-on for a few days now and euro dollar is down at $1.10. They’ve bought the dollar whereas at times in the past they’ve done the reverse,” said Neil Mellor, an analyst at BNY Mellon.
The euro slipped 0.1 percent to $1.1011, close to a two-week low of $1.0989.
Against a basket of currencies, the dollar index rose 0.1 percent to 98.352.
The yen, usually bought when investors turn nervous, has struggled in recent sessions as equity markets soared. The dollar gained another 0.1 percent to 109.18 yen on Wednesday.
Elsewhere, the Australian dollar skidded 0.1 percent to $0.6779 as investors bet on more Reserve Bank of Australia easing. Westpac Bank Chief Economist Bill Evans said he expected two central bank interest rate cuts and quantitative easing (QE) to be introduced next year.
Expectations for more policy easing have weighed on the Aussie, which is highly correlated to global investor sentiment and the outlook for China, despite growing optimism over a trade deal.
On the other hand, the hard-hit Swedish crown has found space to rebound. The trade-exposed crown was last up 0.1 percent against the euro at 10.555 crowns per euro, close to a four-month high of 10.5505 hit on Monday.
Sterling slipped another 0.2 percent to $1.2843 a day after polls showed a narrowing in the Conservative Party’s lead ahead of a Dec. 12 general election.