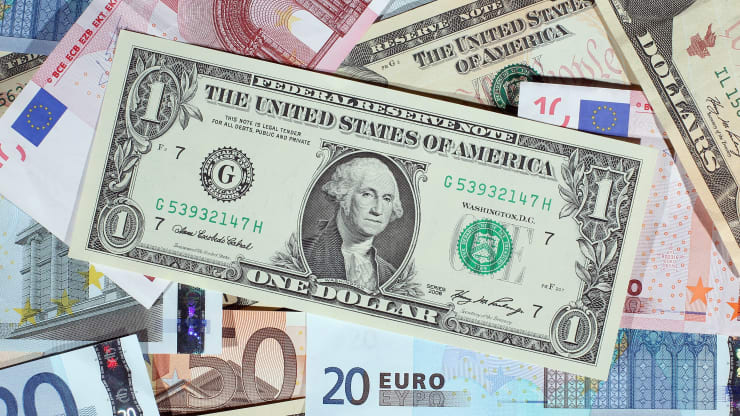 The dollar started the new year where it left the old one, on the back foot as investors wagered U.S. economic outperformance might be drawing to a close as optimism on trade brightens the outlook for growth globally.
Signs of progress in the Sino-U.S. trade dispute undermined the dollar for much of December, leaving its index down 1.9% on the month. It was up just a fraction on Thursday at 96.546 having touched a six-month trough ahead of the holidays.

The euro held at $1.1215, after gaining 1.8% in December to reach its highest since early August. It now looks set to challenge the August peak at $1.1249.
The dollar eased further on the Chinese yuan after shedding 1% last month to stand at 6.9630. It was also finely poised on the yen at 108.68, just a whisker from the December lows and major support around 108.40.
“A more encouraging global growth outlook and flush dollar liquidity conditions are undermining the USD,” said Elias Haddad, a senior currency strategist at Commonwealth Bank of Australia.
“Specifically, global fiscal/monetary policy settings will remain accommodative in 2020 and China’s growth slowdown is stabilising.”
China’s central bank on Wednesday cut the amount of cash that banks must hold as reserves, releasing around 800 billion yuan ($114.91 billion) to shore up the economy.

A survey of Chinese manufacturing out on Thursday showed activity was still expanding in December while confidence shot higher as trade tensions eased.
The dollar had benefited from U.S. economic outperformance for much of 2019, but an easing in Sino-U.S. trade concerns has boosted optimism that this year could favor other major nations.
While activity was light on Thursday, traders were on watch for any repeat of last January’s “flash crash” when massive stop-loss selling swept through an illiquid holiday-hit market.
There are fears the same could happen this week with Tokyo off and Japanese retail investors again heavily short of yen and long of risky high-yielding currencies, including the Turkish lira and the South African rand.
For liquidity reasons, these positions are usually “legged” through the U.S. dollar – selling yen for dollars and dollars for lira – so any mass unwinding roils more than just the yen crosses.
Yet, unlike last year, the authorities are on alert with the Financial Futures Association of Japan warning against wild moves.
The Federal Reserve has already averted a squeeze in lending markets as banks took only a small portion of its d $150 billion in year-end funding, leaving repo rates at the lowest since March 2018.