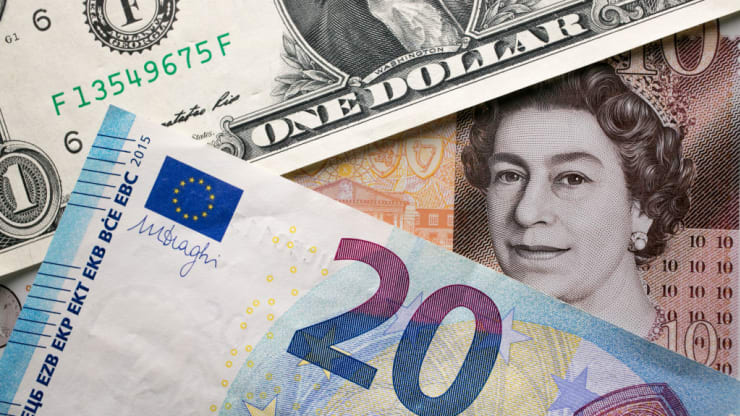 The dollar was headed on Friday for its highest weekly finish against the safe-haven yen since May, as data showing the U.S. economy is on a firm footing had investors scaling back rate-cut bets.
Nerves persisted though, as other major currencies spent the week rangebound, navigating a blizzard of trade war headlines that offered few clues as to when or how a truce might be agreed between Washington and Beijing.

“There seems to be pretty good optimism around the trade talks going on between U.S. and China,” said William O’Loughlin, a portfolio manager at Rivkin Securities in Sydney.
“Though as we know that can change on a dime…the rally doesn’t feel like a euphoric, super-bullish rally, it does feel like climbing the wall of worry.”
On Friday, the dollar drifted lower on the yen and against the Australian and New Zealand dollars, but not much. It bought 109.46 yen, and if it holds there will post a 0.7% gain for the week and hit its highest weekly close since May 31.
The British pound has been the week’s other main beneficiary, adding half a percentage point as Prime Minister Boris Johnson’s Conservative Party has firmed in opinion polls ahead of the Dec. 12 election.
Sterling was steady on Friday at $1.2910, while the euro held at $1.1010.

“The market has come to the view that this is Johnson’s election to lose now,” said Chris Weston, head of research at Melbourne brokerage Pepperstone, with expectations he can win with a large margin.
“That said, should any polls call this margin into question, where invariably there will be one or two, then GBP could see a sharp sell-off, although I would be using that weakness to buy.”
The dollar’s strength this week has drawn on hopes that the United States and China are making progress in negotiating a ceasefire in their damaging tariff war, and on strong U.S. economic data.
China has vowed to impose “firm countermeasures” after Trump’s approval of a bill backing Hong Kong’s pro-democracy protesters on Wednesday, but is yet to indicate whether they would have any bearing on trade talks.
U.S. economic growth picked up slightly in the third quarter, data showed on Wednesday, in contrast to other indicators showing a slowdown in global activity.
The Federal Reserve also flagged an upbeat outlook amid signs of labor market strength and a possible turnaround in business investment.
That prompted a pullback on rate cut bets for this year and next, with the market now pricing in a 5% chance the Fed will hike rates next month and most expecting it to hold steady.
The strong greenback has the Australian dollar slightly weaker for the week, but it was 0.1% stronger on Friday ahead of a central bank meeting on Tuesday, where the market has priced an 11% chance of a cut in interest rates to a record low 0.5%.
It last traded at $0.6775, lifting it from a six-week low hit on Thursday.
The New Zealand dollar rose by the same margin to $0.6424 to be a little stronger for the week, buoyed by rebounding business sentiment.
China’s yuan was steady at 7.0317 per dollar in offshore trade.