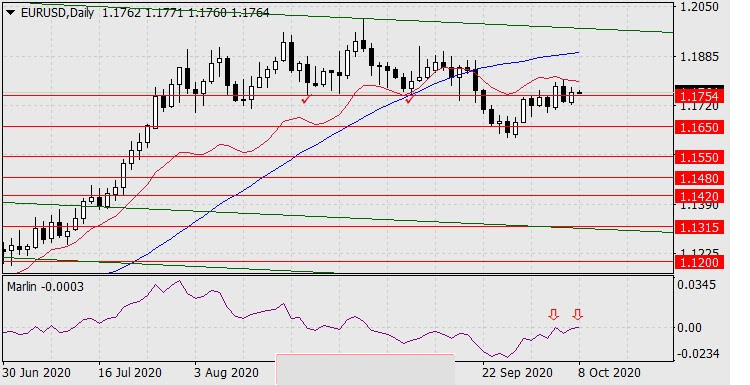 Yesterday, the euro did not react in any way to US President Donald Trump’s statement about the need for lawmakers to increase sector assistance to air carriers and individuals during the second wave of coronavirus, as well as to the Federal Reserve’s minutes, which spoke of the need for state stimulation. In practice, these events did not mean anything to the markets, since the Democrats have already declared that they are against the dispersion of funds across sectors and insist on large-scale funding worth 2.2 trillion. dollars, and the minutes only covertly supported this concept.

The euro is consolidating at the signal level of 1.1754, which has practically lost its role as a signal level and has become a common level (it turns red). Settling under it will become a condition for the euro to decline further, the first target of this scenario will be the 1.1650 level, followed by 1.1550. The signal line of the Marlin oscillator is reflected downward from the border of the growth territory for the second time.

The price remains above the balance and MACD indicator lines on the four-hour chart, but the Marlin signal line also reverses from the border of the growth territory. Moving the price under the MACD line, below 1.1705, will fix the condition for pulling down the euro even further.