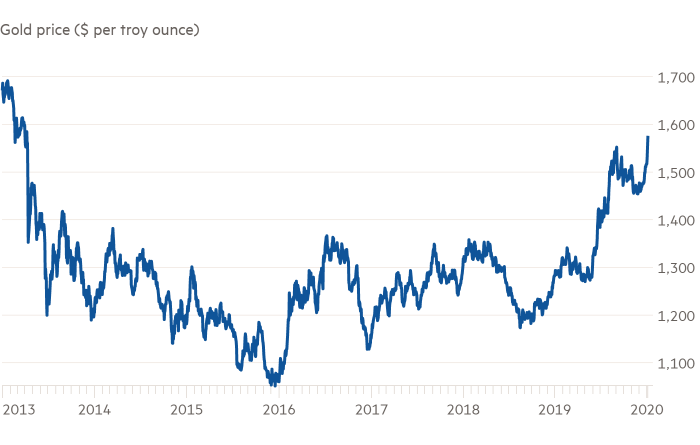 Gold prices inched lower on Tuesday, a day after hitting their highest in nearly seven years, with a lack of immediate escalation between the United States and Iran denting bullion’s safe-haven appeal.

Providing limited support to gold, Defense Secretary Mark Esper said on Monday the United States has no plans to pull its troops out of Iraq, following reports of an American military letter informing Iraq officials about the repositioning of troops in preparation to leave the country.
U.S. Vice President Mike Pence will give a speech next Monday laying out the government’s policy on Iran, a White House official said, after the U.S. killing of a top Iranian general sparked protests across the Middle Eastern nation.

Tanzania’s earnings from gold exports rose 42% year-on-year in the year to November, helped by higher prices and volumes shipped, the central bank said on Monday.
Goldman Sachs on Monday maintained its three-, six- and 12-month forecast for gold at $1,600 per ounce, contending safe-haven bullion to be a better hedge than oil during phases of geopolitical uncertainty.
The world’s largest gold-backed exchange-traded fund, SPDR Gold Trust, said its holdings rose 0.10% to 896.18 tonnes on Monday from 895.30 tonnes on Friday.
Hedge funds and money managers increased their bullish positions in COMEX gold and silver contracts in the week to Dec. 31, data showed on Monday.
Elsewhere, silver slipped 0.5% to $18.06 per ounce, while platinum was flat at $962.68.