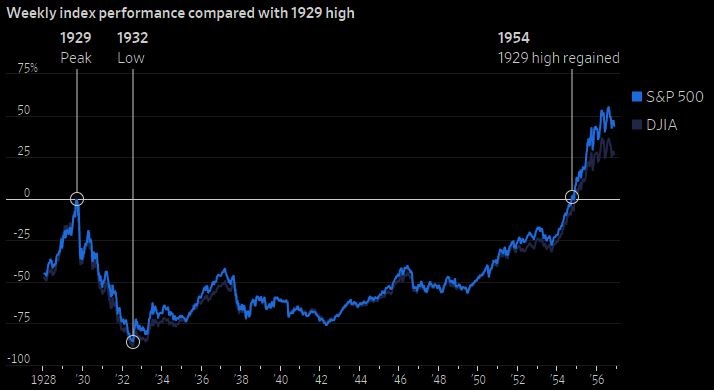 The period of 24-29 October 1929 was crucial for the financial world. Within four trading days, the market collapsed with more than 25%. It all started with an 11% drop in the opening on Thursday, October 24, followed by panic. Trading was halted after Morgan, Chase and National City intervened, with the DOW ending the session with a slight decline. Buyers returned on Friday and Saturday, when there was a trading session but part-time. However, everything fell apart. The actual sale and margin calls began on Monday, October 28th. The index fell by 13%. The next day a 12% record volume that has not been surpassed in the next 40 years. The buyers looking for the bottom then intervened. The market jumped 12% on Wednesday, October 30th. Profits that would later be wiped out. The losses were covered by April 1930, but by the time the bottom was reached the market had already lost 89% of its value. The peak was not crossed until November, 1954. But these are the less important details. What is not yet clear is why it happened. It is widely believed that high loans and over-the-top estimates are high, but this argument is not sufficiently substantiated. But statistics show that industrial companies were overestimated 13 times in October over their usual estimates, 15 times less than they were in September. The best performing company then was Radio Corp America with a rating 73 times above normal. There was so much Amazon at the beginning of last week. That’s the scary thing about the crash 90 years ago. Even after more than half a century, there are no simple and straightforward answers. There were some obvious mistakes – the interest rates were too high, there was rising protectionism. But something inexplicable happened to the masses, to the psychology of the markets. This has happened several more times, including the decline since 1978. Even the decline of nearly 20% last December contained elements of panic. So while there are people in the markets, there will be fear and irrationality. What makes the situation in 1929 unique is that the decline came before one of the worst economic periods in history. However, the crash of 1929 is not considered a precursor to the Great Depression. It was not until 1930-31 that it struck and the banks began to collapse.