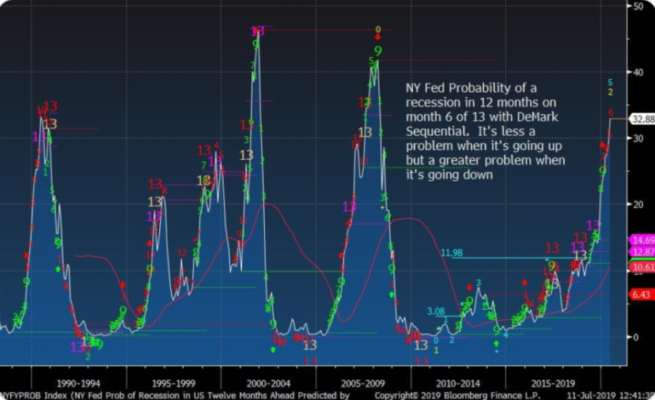 Ian Harnett: We could see a “really sharp correction” within the next 18 months

Global recession risks are on the rise and we could see a “really sharp correction” within the next 18 months, according to Ian Harnett, chief investment strategist at Absolute Strategy Research.
Harnett suggested that the U.S. Federal Reserve is worried that economic growth will slow and unemployment will rise, leading the central back toward “insurance cuts” to its benchmark rate in the near future.
He suggested that price-to-earnings (P/E) ratios, an important metric used by traders to gauge the value of stocks, pointed toward a substantial downturn.
“You’ve got the Shiller P/E (ratio) back over 30 times, last seen in the tech bubble, last seen just prior to the 1930s depression,” he explained. The Shiller P/E is a valuation measure usually applied to the U.S. S&P 500 equity market. He also pointed toward the trailing P/E in the U.S. market, a valuation based on the last 12 months of actual earnings, sitting at “22 times, higher than it got at its highest level in the 1960s.”
“This is a huge recipe for a really sharp correction in global equity markets at some stage in the next 18 months,” he concluded.
Source: CNBC