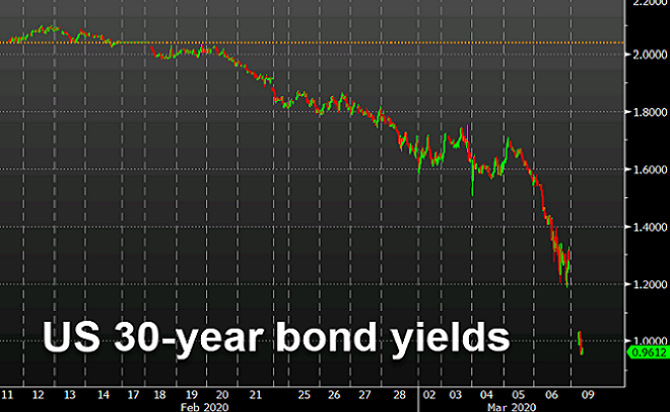 A gauge of volatility in the euro/dollar market – the world’s most-traded currency pair – shot to its highest since April 2017 as the euro surged more than 1% to its strongest since January 2019.

Dollar-yen one-month implied volatility surged to an 11-year high at 8.8% as the dollar slid to its weakest since 2016.

Investors are dumping dollars because of the collapse in U.S. Treasury yields. The benchmark yield is at 0.47%, after trading above 1% a few days earlier, as traders shed risky assets and head for the safety of government bond markets.

That unnerved investors already rattled by more than a weak of wild moves in markets, as they struggled to assess the economic damage caused by the coronavirus.

“Financial markets have suffered a rude awakening to notions that volatility was a thing of the past. We’re now seeing the kind of market dislocation not witnessed since the 2008-09 global financial crisis,” ING analysts said, describing the set-up as a “perfect storm” for currency markets.

“This all conspires to deliver an extreme flight to safety, into the likes of the JPY and the CHF,” they wrote.

The Saudi price war was a flash point for today’s action but it’s really all about coronavirus. The news on the weekend worsened with too many cases and outbreaks to count.

The conditions for a panic were evident the moment markets opened and I warned about the storm. When markets in Tokyo opened for the week, it hit. Japanese market participants invest abroad massively but when uncertainty hits, they bring their money home. It’s a classic knee-jerk trade that everyone in FX knows. No one wants to be the last one to the exit and now the building is on fire and it’s a stampede.
But what really caused the panic right now?
It’s the virus. Traders, investors and other market participants are assessing the situation and there is no faith in leadership or a solution. As the market looks out a week, a month or two months there is no real scope for any kind of good news. This is going to get worse every day; day after day. It’s going to be drip torture for anyone who dare owns risk assets and that kind of thing breaks people. So you either get out now or you endure the pain. Few can endure the pain.
The absolute apex of the trade right now appears to be Australian stocks. The benchmark S&P/ASX 200 is down 8.6% today (daily chart below). Price in yen, it’s down 13.5%.