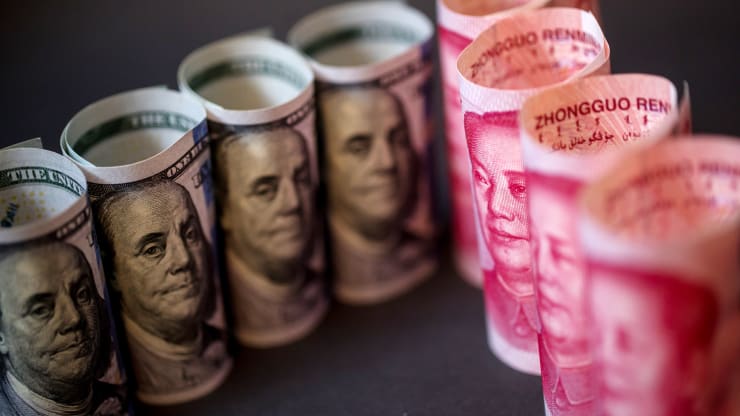 Currencies made a muted response to the U.S.-China trade deal on Monday, as last week’s brief relief that an agreement had been reached was replaced by frustration at a lack of details, and a reluctance to make big bets as Christmas draws near.
Washington and Beijing cooled their trade war last week, reducing some U.S. tariffs in exchange for what U.S. officials said would be a big jump in Chinese purchases of American farm products and other goods.

That had lifted the Australian dollar and pushed down the safe-harbor yen last week, before profit-taking set in.
“We’ve been a little but underwhelmed by the details of what we know now,” said Rodrigo Catril, senior FX strategist at National Australia Bank in Sydney.
“The good news is that now we have more surety in terms of the prospect of an increase in tensions. The market needed that assurance. But in terms of the rollbacks they’re quite minimal.”
The trade-sensitive Australian dollar fetched $0.6878, easing from Friday’s four-month high of $0.6930.
The Chinese yuan traded at 6.9959 per U.S. dollar, still stronger than the symbolic 7 mark but below the four-month high of 6.9589 that it hit last week.

Both currencies found some support from slightly stronger-than-expected Chinese production and consumption data.
The euro rose marginally to $1.1129, as did the Japanese yen to 109.40 per dollar. Against a basket of currencies, the dollar weakened 0.1% to 97.084.
Fine details of the trade deal, which has not been signed yet, are awaited.
U.S. Trade Representative Robert Lighthizer said on Sunday the deal will nearly double U.S. exports to China over the next two years and is “totally done” despite the need for translation and revisions to its text.
A date for senior U.S. and Chinese officials to formally sign the agreement is still being determined, he added.
“We have seen over time more reports about the differences between what the U.S. said and what China said about the agreement,” said Takafumi Yamawaki, head of fixed income research at JPMorgan Securities in Tokyo. “The U.S. talks about the size of U.S. farm products China will buy but China stayed mum.”
Elsewhere, sterling climbed back towards Friday’s peak, adding half a percent to $1.3386, basking in the glow of a Conservative election victory that British Prime Minister Boris Johnson called a “huge great stonking mandate.”
“The focus now turns to Brexit and the 31 January deadline, with the election results giving Prime Minister Johnson a clear mandate to pave the way out of Europe,” ANZ analysts said in a note.
The dollar’s weakness also helped the Hong Kong dollar to a fresh five-month high of 7.7893 per dollar.
Source: CNBC