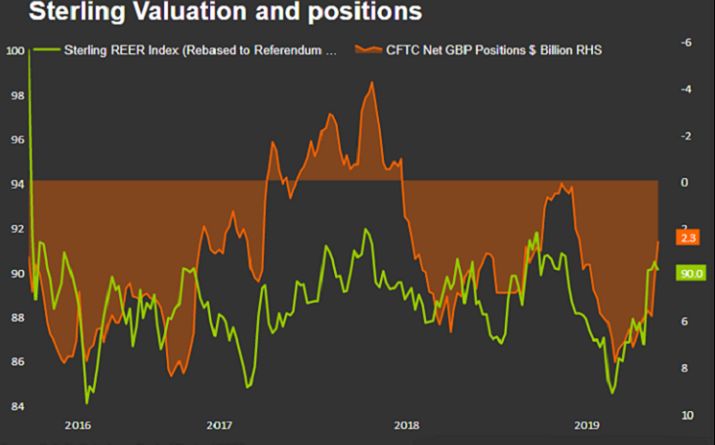 Sterling edges down from six-month highs vs. euro as Brexit Party boost ebbs

Sterling inched down from six-month highs against the euro and was a touch softer against the dollar on Tuesday, as a boost from the Brexit Party’s decision to not contest previously Conservative-held seats in Britain’s upcoming election faded.
The pound rallied as much as 1% versus the dollar on Monday after Brexit Party leader Nigel Farage said he did not want anti-Brexit parties to win, so was standing down candidates in seats won by the Conservatives in 2017.
While the move was seen as a significant boost for Prime Minister Boris Johnson ahead of the Dec. 12 election, currency analysts said plenty of headwinds for sterling remained.
This reflected a more cautious note to trading on Tuesday.
“Yesterday’s sterling move was very large for what we saw as a limited change in the outlook for the election,” said Adam Cole, head of FX strategy at RBC Capital Markets.
“A Tory majority is a bit more likely but there are still obstacles,” he said, referring to the ruling Conservative Party.
At 1030 GMT, the pound was down 0.15% at $1.2832, having flirted with $1.29 on Monday. The U.S. currency was broadly firmer ahead of a key speech by U.S. President Donald Trump later this session.
Against the euro, sterling was a touch softer on the day at around 85.91 pence – down around a third of a percent from Monday’s six-month peak of 85.62 pence.
If the Conservatives win a majority, the pound could bounce 3%, according to a recent Reuters poll. Bookies now say a Tory majority is the odds-on favourite.
Jim Reid, a strategist at Deutsche Bank, said that while the Brexit party news was positive for the ruling Conservative Party, it may only bring an additional 10-15 seats.
“So, helpful to the Tories rather than game changing,” he said in a note.
Economic data meanwhile continued to play second fiddle to the looming election.
Britain’s employers cut the most jobs in over four years between July and September, according to official data which highlighted how the labour market is slowing.
The unemployment rate fell back to 3.8%, its lowest level since early 1975 during the third quarter, but falling employment, weaker wage growth and reduced vacancies pointed to a weaker outlook.
Currency analysts said a weakening economy and expectations for a Bank of England rate cut in the months ahead were additional reasons to be cautious on the pound.
Two BoE policymakers voted to cut rates last week and others could follow if growth remains weak and uncertainty persists about the longer-term trade ties between Britain and the European Union.