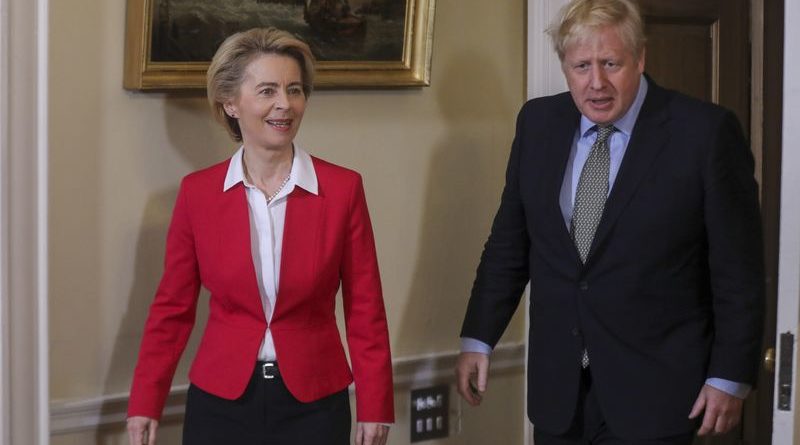 UK economy, not Brexit, will drive the pound in 2020, analysts say

*The pound will react more to U.K. economic indicators than the twists and turns of Brexit in the first half of 2020, and will likely remain supported, according to currency strategists.

*British Prime Minister Boris Johnson and new European Commission President Ursula von der Leyen met in London on Wednesday to begin discussions over a future zero-tariff trade deal, with the U.K. scheduled to leave the EU at the end of this month.

Johnson has pushed legislation to prevent trade talks extending beyond December 2020, despite seeking a similar deal to that between the EU and Canada, which took seven years to negotiate. U.K. lawmakers on Thursday approved legislation allowing Britain to leave the European Union with an exit deal, following three years of stalemate over the terms of the departure. Analysts are suggesting, however, that the pound is unlikely to reattach itself to Brexit developments until later in the year when progress, or a lack thereof, becomes clear. In the meantime, economic data, fiscal and monetary policy will guide sterling. GBP supported by economic ‘greenshoots’ Sterling received a sharp initial boost after Johnson’s ruling Conservative Party secured a huge majority in December’s general election, but profit-taking and realism over the difficulty of securing a 2020 trade agreement quickly sank in. The pound was back down at around $1.306 on Thursday afternoon. In a note on Tuesday, Nomura FX Strategist Jordan Rochester projected that sterling would drift higher, and signaled a renewed long call on the pound versus the dollar towards $1.36. Rochester suggested that the next two weeks of data will likely determine whether the Bank of England adopts a more dovish approach, given dismal U.K. growth data of late, but argued that signs of a rebound in new orders and the global economy give cause for optimism. “The removal of near-term hard Brexit risks, the widely expected fiscal expansion, U.S.-China trade tensions lower and a global recovery in economic data suggest the Bank of England will stay on hold,” Rochester said. “We argue that the market has yet to meaningfully price a rebound in U.K. and European data vs that of a slowing U.S. economy.” With monetary policy in many developed economies having almost exhausted its potential, Rochester suggested that a “sizeable loosening” of fiscal policy in the newly empowered Conservative government’s March budget could also offer support to the pound. Meanwhile, the U.K. saw substantial improvements in the current account and basic balance in the third quarter of 2019 despite the still-present risks of a hard Brexit, the Nomura note highlighted. “The current account may have improved owing to a weaker currency, but that would not explain the improvement in the basic balance, which saw large portfolio flows into both UK fixed income and equities,” Rochester added. Beyond domestic indicators, a combination of central bank balance sheet expansion, U.S.-China trade progress and the beginnings of a recovery in the cyclical slowdown of global macro data are likely to benefit high beta currencies such as sterling, while exerting downward pressure on the dollar. Rally to $1.45 Others are even more bullish on the outlook for cable, and HSBC Senior FX Strategist Dominic Bunning told CNBC on Wednesday that investors should investors should look to 2017 for an example of how the market may treat the currency during the negotiation period. “Article 50 negotiations started, at the time we were quite bearish on the pound because we thought that this uncertainty has to be bad for the currency still, and the market just ignored it for the best part of a year, if not slightly longer,” he told CNBC’s “Street Signs Europe.” Bunning suggested that investors should instead look to U.K. economic indicators, with any improvement likely to elicit significant upside potential for the pound, which he contended is “still cheap on a long term basis.” “That’s particularly true relative to Europe and relative to the U.S. where you are seeing a greater slowdown, so if you get a bounceback in consumer confidence, business confidence, fiscal spending, the Budget on March 11, all of that starts to come through, actually the cyclical outlook for the pound suddenly starts to improve relative to the rest of the world,” he said. Bunning went as far as to project that the pound could rally as high as $1.45 in 2020 should all of these upside risk scenarios come to fruition. Source: CNBC