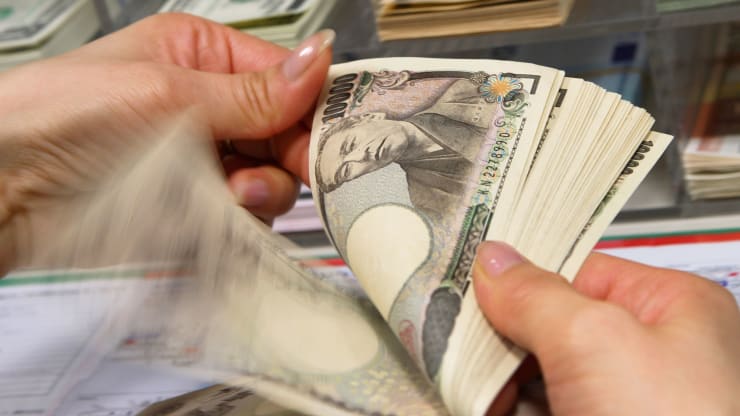 The yen and Swiss franc held gains against the dollar on Wednesday as appetite for safe-havens spiked after U.S. President Donald Trump warned a trade deal with China might not be in place until after the 2020 U.S. presidential election.
That sent the Chinese yuan to a 5-1/2-week low against dollar as investors feared the United States could carry out its plan to raise tariffs even further on Chinese goods on Dec. 15.

The U.S. currency, however, was broadly sold against its major rivals, which helped sterling climb to its highest level in more that six months on the greenback.

Trump’s statement that he had “no deadline” for an agreement with China hurt sentiment and roiled financial markets. Global trade frictions have already weakened world growth with many economies struggling to find their footing in the face of softening exports, investments and corporate profits.
The offshore yuan, fell to 7.0738 per dollar, close to its weakest level since Oct. 18. The onshore yuan opened on Wednesday at its softest since Oct. 25, and was last quoted down 0.1% at 7.0692.
“Expectations for a U.S.-China trade deal are fading, and dollar/yen has broken its support levels, so the bias is tilted to the downside,” said Takuya Kanda, general manager of research at Gaitame.com Research Institute in Tokyo.
“More tariffs would push dollar/yen lower still.”

The yen stood at 108.60 versus the dollar on Wednesday, close to its strongest since Nov. 22.
The Swiss franc was quoted at 0.9875 versus the dollar, near its highest level since Nov. 4.
Both the Japanese and Swiss currencies tend to be bought as safe-havens during times of uncertainty.
Trump was already at the center of a major stir on trade this week.
On Monday, he said he would hit Brazil and Argentina with import tariffs for “massive devaluation of their currencies.”
The United States then threatened duties of up to 100% on French goods, from champagne to handbags, because of a digital services tax that Washington says harms U.S. tech companies.
The latest Trump comments on the prospects for a China-U.S. trade deal underline the gulf on trade and other issues between the world’s two biggest economies.
U.S. Commerce Secretary Wilbur Ross on Tuesday said that while staff-level talks are continuing with Chinese officials, no high-level meetings are scheduled.
If there is no deal or substantial progress in talks before Dec. 15, tariffs on remaining Chinese imports, including cell phones, laptop computers and toys, will take effect, Ross told CNBC on Tuesday.
The dollar index against a basket of six major currencies was quoted at 97.768, having skidded to a one-month low.
Sterling benefited from the dollar’s woes and traded at $1.2993, close to the highest since mid-May.